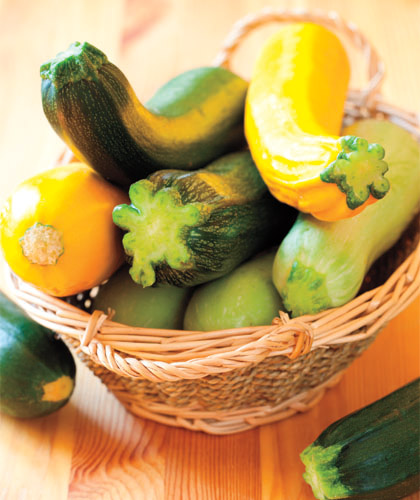 Zoom In On Zucchini

While varieties of squash have been grown and consumed since before 5000 B.C., the zucchini is a relatively new addition to the culinary scene. Developed by the Italians in the late 19th century, zucchini made its way into other European countries, including Great Britain and France, where it’s called courgette. Zucchini is actually the Italian plural form of zucchino, which is derived from zucca, the Italian word for squash. Italian immigrants brought the vegetable to America, commercially cultivating it in California during the 1920s. It is now the most common summer squash.

With its soft flesh and delicate skin, zucchini should be stored in a plastic bag in the refrigerator for no longer than five days. While it’s best to look for smooth, shiny surfaces, zucchini’s thin, tender skin scratches easily. These minor blemishes are common, but pass over zucchini with bruises or deep cuts and cracks. Available in-store year-round, ideally, zucchini should be six to eight inches long and can be steamed, sauteed, grilled, fried or baked. Larger zucchini contain less moisture, making them perfect for grating into breads, cakes and vegetable fritters. Zucchini is rich in nutrients but very low in calories. One cup of raw zucchini has about 20 calories and contains B vitamins, vitamin C, magnesium, fiber and protein.