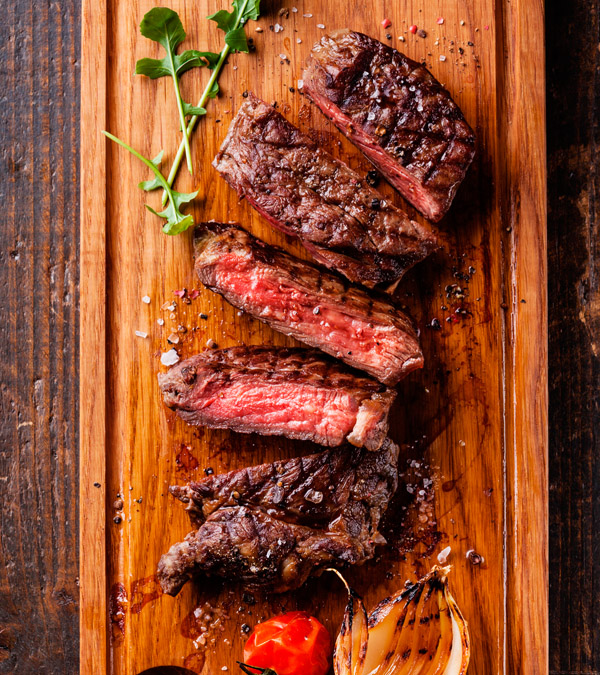 United Steaks of America
Whether it’s a juicy T-bone or a lean top round, steak is perfect for any occasion from anniversary celebrations to family suppers. No matter the cut, the hallmarks of a good steak are the crusty exterior (which is where a lot of the flavor comes from, as well as the marbling) and the juicy, tender interior. Even though it’s a quick cooking protein, when it comes to preparing a great steak, it’s an exercise in planning and patience. The payoff? Steak that is a cut above, every time.

Planning is key, factoring in the appropriate time needed to season properly and bring the steak to room temperature. Don’t be shy when it comes to seasoning. Season meat by rubbing a liberal amount of salt and pepper a few hours before you want to cook it. Kick it up a notch by experimenting with different rubs for an international flair, such as a Mexican spice blend of chiles like ancho, paprika, cayenne, cumin and a dash of sugar. Marinades are also a great way to boost flavor.

After seasoning, leave at room temperature for at least 30 minutes or even longer; thinner cuts need only about 30 minutes, but steaks thicker than an inch should be left out for at least one hour. Make sure the meat is dry by patting with a paper towel; moisture will prevent browning. A chef trick is to lightly dust it with flour to make sure the surface is completely dry; this will also result in a deeper sear.

The cooking method will also dictate the flavor of your steak. Grilling will give it a smoky, charred flavor, while stove-top cooking gives you the option of bathing the steak in butter as you finish cooking. Either way, you want to cook at a very high temperature to start the reaction (known as the Maillard) that leads to that beautiful crust.

Grilling over charcoal is all about heat management. When the grill is ready, check for hot and cold spots by placing your hands over the grill. Oil the grates with tongs and a paper towel. After placing steaks on the grill, resist the urge to move! When the steaks naturally release from the grates after a few minutes, give it a quarter turn to get those nice grill marks. Flip and repeat until done. You can also finish it off in the oven, which is a great way to entertain because you can grill earlier in the day and then put it in the oven when your guests arrive.

When cooking on the stovetop, the principles are still the same. Heat the pan, preferably a cast-iron skillet, so it gets blazing hot, then add the oil. Make sure you hear that sizzle when the meat hits the pan. If the pan isn’t hot enough, food can stick and steam rather than brown. Another chef trick is to add butter and herbs to the pan and baste it after you flip the steak once. Or, start it off on the stove and finish it in the oven, a technique called pan roasting, which is especially important when cooking a thick steak. Pop it in a 400°F oven on a roasting rack over a baking sheet.

Whether grilling or pan roasting, cooking to the proper temperature is key. Steaks should be cooked until internal temperature reaches 130 to 145°F for medium-rare to medium. For maximum flavor, don’t cook beyond this threshold, keeping in mind that even when taken off the heat, there will be carryover cooking. Resting the meat for about 15 minutes to let the juices redistribute is the final stage. Slice against the grain to ensure your steak is still juicy.